Back to Latest Articles
Literature

Half of a Yellow Sun

This extraordinary book has been widely and aptly classed as one of the best novels from the African continent in recent times. It was set in the 1960s and 70s, from the point of Nigeria’s independence from British rule to the rise and fall of the Biafran state in South-eastern Nigeria. The book is centered around intriguing characters, all with unique traits that engender the story’s general eclectic brilliance. Chimamanda’s highly descriptive and fluid vocabulary captures the early days of colonial independence, and paints a picture so graphic, it places the reader right into those times. What impressed me especially was her vivid description of the profundity of the early Nigerian intellectual community, and how her constant engagement of ethnic stereotypes relaxed—rather than reinforce—them on the reader. To enhance the tension, Chimamanda skips through time, from the early 60s to the late 60s, and back, yet she maintains, on the reader’s mind, an ease of keeping track with the character’s personalities. Her ghoulish description of war scenes paints a picture of exactly how gruesome the deaths and hardships the Biafran war were.

The book would impress upon the reader a further appreciation of the culture, nationalist, and entrepreneurial spirit of the Igbos in South-eastern Nigeria. Even between the tragic lines of the prose, Chimamanda engaged sharp humor that just keeps you going till you have no more leaves to flip.  This book perfectly paints a graphic picture of the reality behind the façade of fiction. It’s a great gate to from which to start navigating the very heart of Nigeria.

For a brief irrational moment, she wished she could walk away from him. Then she wished, more rationally, that she could love him without needing him. Need gave him power without his trying, need was the choicelessness she often felt around him.

Do yourself a great favor, and read this book. 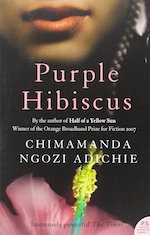 Purple Hibiscus is Chimamanda’s first novel, and it’s quite extraordinary. At 25, she carefully describes the dark walls of religion, along with its consequent furnishing—westernization. The novel is seen through the eyes of an innocent young girl, Kambili, whose weltanschauung is one aggressively dictated by her father, Papa. Papa is a bigoted Catholic, perfectionist, and an ironically loving father. He abusively battered discipline into his children, Kambili and Jaja, until they were forced to have a taste of freedom when they vacationed at an Aunt’s house during the peak of a political crisis in Nigeria. It was there that Kambili first explored romance and freedom of thought, and Jaja nurtured teenage rebellion against his father.

What later unfolded is best for the reader to discover. Purple Hibiscus is indeed a fascinating book with a lucid description of South-eastern Nigeria’s landscape, language, and culture. I do have to add though: It’s advisable to read this book before ‘Half of a Yellow Sun’ if you are going for an Adichie marathon. The latter sets a very high standard.

The Thing Around Your Neck 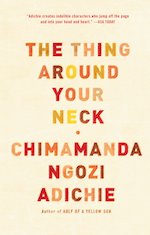 The Thing Around Your Neck is a collection of short stories: a dozen. Here, Chimamanda succeeds in sketching real-life circumstances vividly. These series of tragedies, that only intensifies as the reader progresses, do not necessarily preach many morals; they rather activate an understanding of some of the many injustices in the society. Nigerian readers especially will likely empathize with many characters in most of the stories: the pains and pleasures of Nigeria, the mirage of American dreams, and the differences and similarities of both.

Each story is distinct in the plot and frighteningly real; describing any of them would be doing you a gross disfavor. With the use of interesting and innovative second-person language in some of the stories, this book promises to be almost as personal to the reader, as it is, obviously, to its author.

Not like any other book you will ever read.